The award-winning £5.5 billion regeneration of Liverpool Waters is one of the most exciting projects to date. Transforming a combination of two million square metres of land, the project is a radical vision for the city. As a result, the once derelict docks will be rejuvenated.  It will become a hot spot for business and leisure. The project will make use of multiple docks including Liverpool Waters Clarence Dock and the new home of Everton Football Club, Bramley Moore Dock. 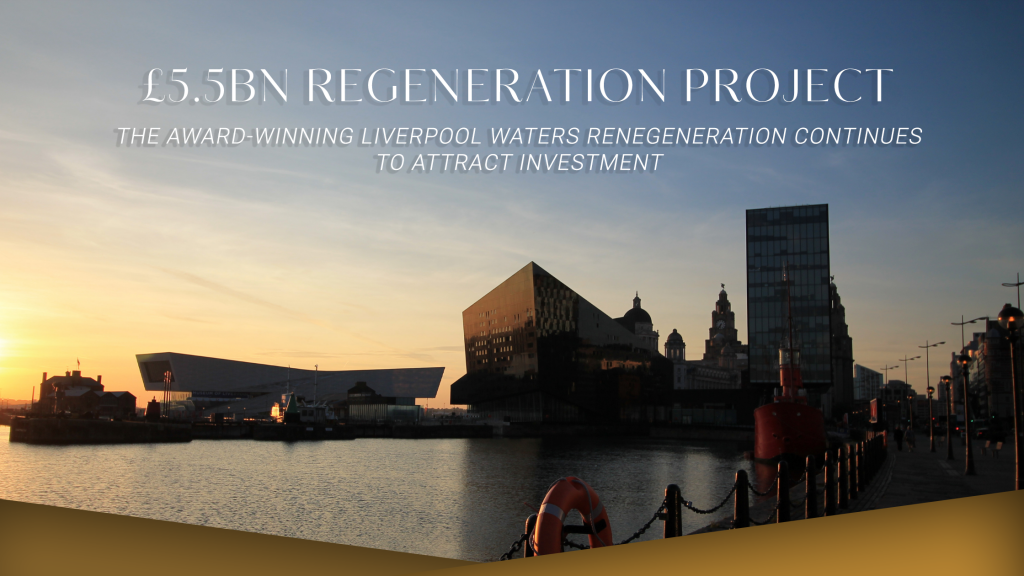 The Heritage of Liverpool’s Waterfront

Liverpool is renowned for its waterfront. Stemming from Liverpool’s status as a world trading port, the city’s industrial history is long and illustrious. In fact, Liverpool was a key player in the growth of the British empire. The waterfront city played a vital role in transporting commodities across the sea to Europe and America. Thanks to its innovation and superior dock facilities, Liverpool gained international status among other trading terminals across the globe.

The regeneration project plans to incorporate Liverpool’s rich history by intertwining it into more modern architecture. As a result, Liverpool Waters will be an outstanding example of innovative design. Creating a beautiful skyline, the project will be envied by other neighbouring cities throughout the UK. For example, structures such as the Dock Boundary Wall and the Victoria Clock Tower will be keeping their historical components. However, they will be accompanied by other new, modern developments.

What Does The Project Involve?

The project, worth over £5 billion, will breathe life back into the run-down docks. This project is particularly prolific, as it will use innovative building design and landscaping to revive the old and historic buildings. Expected to take around 30 years, 15,000 hectares of land and water will become unrecognisable. The Peel Group, who were also responsible for the highly successful MediaCityUK regeneration, will be heading the project.

Becoming a place to live, work, and play, the vision places emphasis on its multi-use nature. Providing a diverse array of leisure facilities, commercial office space, and residential buildings, Liverpool Waters is already becoming a sought-after investment location. In addition, the project compromises five distinct neighbourhoods. Additionally, the apartments will join Liverpool’s extensive property portfolio of over 9,000 waterfront apartments. The project is well underway with Phase One beginning construction in 2018. As a result, as the construction begins, the area is already turning investor’s heads.

Princes Dock is already a sought-after area of the waterfront. Alongside the existing developments, the regeneration of Princes Dock will create office space, a five-star hotel, leisure facilities, as well as a new cruise terminal.

The Central Dock is the beating heart of the waterfront. Already, Central Dock is a popular location for music festivals and events. However, it is hoped that the regeneration will bring something new to the much-loved venue. A highly anticipated component of this development is the creation of distinctive business spaces and entertainment and leisure units. Also, there will be a new public park in the central docklands and plans to install an Isle of Man ferry terminal soon.

Welcoming 3,000 new homes, Clarence Dock will become an extremely well-sought after living area. Both vibrant and exciting, this particular area will also feature 5,000 square metres of retail space alongside 8,000 metres of restaurants and bars.

The Northern Docks are expected to see the biggest transformation. The most significant element being Bramley Moore Dock, which will become the new home of Everton Football Club and their new revolutionary football stadium. The world-class sports stadium, as well as more restaurants and bars and retail space, are expected to strengthen Liverpool’s economy and attract international tourism.

King Edward Triangle, which will connect Liverpool Waters and the city centre’s business hubs, is poised to be a widely awaited leg of the Liverpool Waters regeneration project. The neighbourhood will be close to the new Liverpool Cruise Liner terminal, bringing an influx of visitors to the area.

Over the last decade, Liverpool has become unrecognisable. The city is bursting with investment opportunities and is cropping up on investor radars across the globe. Not only is Liverpool consistently ranking as having the best rental yields in the UK, but also, ranking highly for its capital growth. The Liverpool Waters regeneration project is prolific in every sense of the word.

Coupled with such affordable property prices, Liverpool’s property market is also extremely robust. The city’s population is excelling on an upwards trajectory and the levels of supply are failing to keep up. Therefore, making for perfect investor market conditions. Liverpool is a magnet for young professionals, making up the majority of the buy-to-let market. Once they get wind of the Liverpool Waters development, tenants will flood into the area eager to take advantage of everything it has to offer.

Even areas surrounding Liverpool Waters will benefit from the gravitational pull of this project. As a result, developments across Liverpool will guarantee excellent returns as the city has become one of innovation and rejuvenation.

It is a prosperous time for Liverpool. If you’re interested in learning more about investing in Liverpool, speak to one of our expert consultants here.

Kingston upon Hull, usually abbreviated to Hull, is a dark horse in the...

For investors choosing the location of their next property investment,...

Do I Need a Lot of Money to Invest in Property?

Whether you are looking to increase cash flow, or achieve financial security,...