Does Brexit Pose a Threat to the Property Sector?

Does Brexit Pose a Threat to the Property Sector?

At the start of the year, decisions around Brexit did pose a threat to the property sector. The uncertainty in house price stability follows the possibility of changes to the base rate at the Bank of England and a no-deal Brexit transition.

In the wake of the EU referendum, the Bank of England dropped the official borrowing rate to 0.25%. Due to the pandemic, the base rate is now 0.1%. Lenders use this information as a benchmark on mortgage interest charges. Mark Harris, chief executive of mortgage broker SPF Private Clients reported: ‘Lenders remain keen to lend and rates are competitive – there are no signs of that changing anytime soon.’ He also expects a ‘minor negative impact at worse’, should there be a No Deal Brexit.

Since the Brexit conversation, in June 2016, house prices started declining. The common trend indicates, prices grow in Spring and level out over a few months. In late 2018 and early 2019, economic uncertainty grew due to Brexit and prices fell steeply. However, amidst the pandemic, the market has witnessed accelerated growth. The average UK house price in June 2016 stood at £213,927, according to Land Registry. In 2019, the figure rose to over £230,200. The rise in house prices reflects the increased demand for homes and the need for larger spaces.

Following the COVID vaccination programme, Oxford Economics predict social distancing will relax from Q2 onwards. This will have a positive effect on the construction industry as many more developers can continue to work on new-builds. Oxford Economics also predicts a boost in the UK GDP forecast for 2021. Estimating an increase from 5.4% up to 6.3%. This is pending the Brexit trade deal decision. 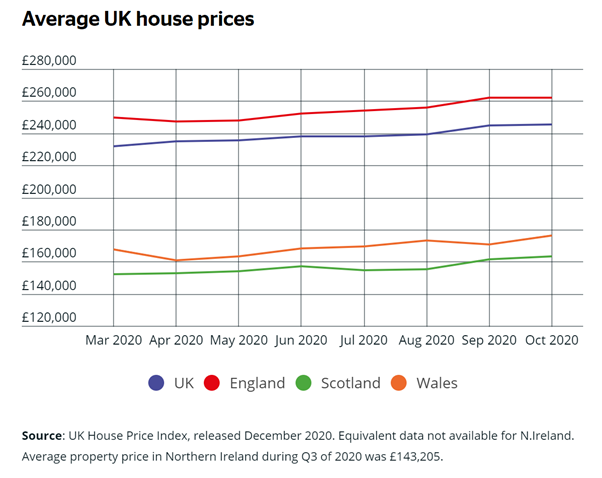 According to Nationwide, house prices increased by 0.9% in November. Therefore, increasing the annual growth rate to 6.5%, the highest since 2015. The year of 2020, is on track to exceed the forecast growth of 4% for the UK market.

The rise has been supported by the influx of mortgage approvals. The agreed sales are steadily transitioning to completed purchases as many rush to beat the stamp duty deadline. In October, the number of approvals exceeded 100,000 for the first time in 13 years. It is expected the number of completed transactions will continue to rise until the end of the stamp duty holiday in March. 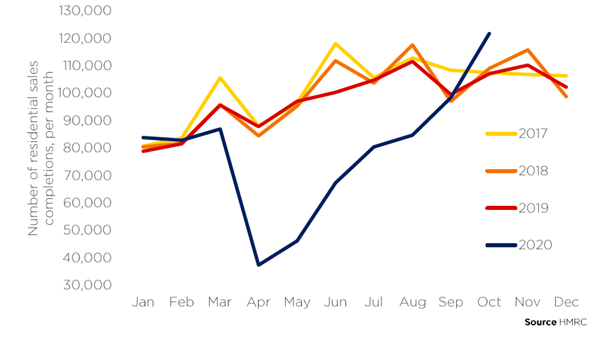