Construction on HS2 Has Finally Begun

It has been 10 years since HS2 was first announced. Today marks the day that construction finally starts on phase 1 of the £106 billion railway.

HS2 has been described by the UK government as:

“a state-of-the-art, high-speed line critical for the UK’s low carbon transport future. It will provide much-needed rail capacity across the country, and is integral to rail projects in the North and Midlands – helping rebalance the UK economy”.

With Boris Johnson set to visit a HS2 site today to officially launch the exciting new project, there is a certain degree of anticipation for what is to come. Against a back-drop of criticism, predominantly surrounding the cost of the project, Johnson has reiterated the need for high speed rail to connect London to other parts of UK. He argues that the increased connectivity will “fire up economic growth and help re-balance opportunity across the UK”.

Aside from the opportunities HS2 will produce once completed, construction of the project is also expected to create 22,000 jobs. This is an enormous boost to the UK’s job market in the wake of the Coronavirus pandemic, which saw unemployment rise astronomically across the country.

Map of HS2 once complete 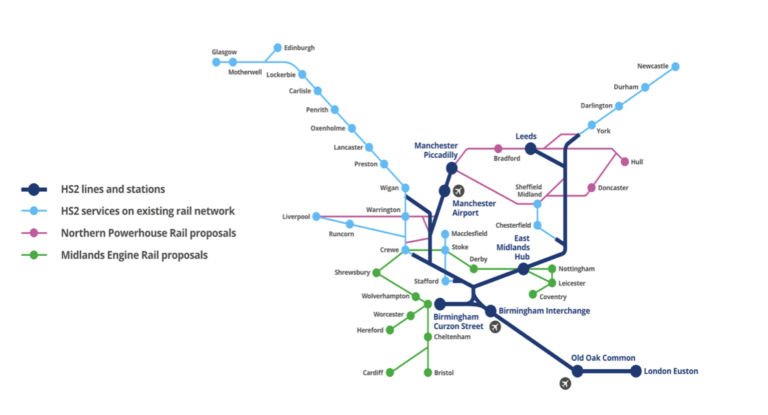 The first phase of the project will see HS2 connect London Euston to Curzon Street in Birmingham. High speed trains will travel between London and Birmingham on 140 miles of dedicated track. They will pass through more than 32 miles of tunnels and over 10 miles of viaducts, delivering quicker journeys on more trains with more seats. Phase One is expected to open between 2029 and 2031.

The Phase 2 line will form a Y shape, split into an eastern and a western leg. The western leg will connect to the high speed lines at Crewe and run through to Manchester. The eastern leg will connect to high speed lines in the West Midlands and run through to Leeds. Services will also travel onward to places like Glasgow, Liverpool, Preston and Wigan. This leg of HS2 is expected to be completed between 2034 and 2040

Essentially, the new HS2 network will become the spine of the countries transport system and provide a much-needed boost to cities outside of London. 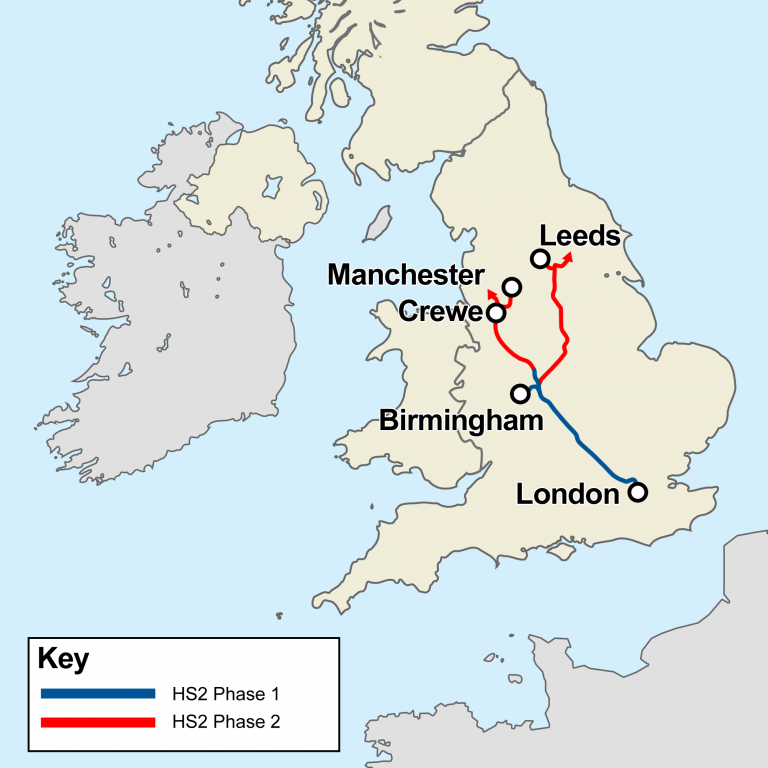 What will HS2’s affect be on house prices?

Whichever way you look at it, HS2 will have the affect of increasing house prices. Depending on the location of the property in relation to the line this price increase could be quite exaggerated or more modest.

At CityRise we have already noticed the effects of HS2 on property, with Birmingham being the primary recipient thus far. Many property investors have expressed that their reason for choosing the West Midlands city to invest in has been predominantly because of the arrival of HS2.

If you look at other infrastructure projects in the UK the patterns are very similar. Property prices generally increase. Take the extension of M40 from Oxford to Birmingham for instance, property prices in towns close to this benefited hugely from the shorter commute to Birmingham.

A more recent example would be Crossrail, a new underground line running from commuter towns in east London to those in the west.  House prices in areas within walking distance to the new stations have experienced house price rises of 30% to 60% more than in other areas of London. Once Crossrail officially opens, we expect prices to increase even further.

With the previous examples in mind, it is not hard to imagine that property prices in the Midlands and North of England will feel what is being coined the ‘HS2 effect’. With a huge influx of jobs being created and commuter times to the capital being stripped, the North will certainly become an even more attractive prospect.

In fact, it is expected that HS2 could have an enormous effect on what we deem a London commuter city. Currently, the average daily London commute is around 2 hours according to the ONS Labour Force Survey. Before the announcement of HS2, living in cities such as Birmingham, Manchester and Leeds were not an option for London commuters. This might all change. The following table shows the reduction in travel times between these three cities and London.

Ultimately, with the promise of better accessibility, property prices in towns fed by HS2 will increase. For property investors and homebuyers alike, the sooner you look to purchase property in the areas discussed, the more likely you will benefit from the high appreciation expected.

Connect with us on LinkedIn